Exploring the Mysteries of the Universe

The galaxies Pisces A and B are dwarf (very small) galaxies outside of our Local Group, but relatively nearby. Note their blue colors, indicating recent young star formation. The Local Group includes Andromeda, the Milky Way and another 50 or so smaller galaxies.

These two dwarfs are in a region of low density at the edge of the Local Void, an area with few galaxies. It appears they have recently moved out of the Local Void into a higher-density region. Their evolution and star formation may have sped up as this occurred.

“Our beautiful neighbor, M31, or the Andromeda Galaxy, is the best known galaxy apart from our Milky Way. M31 is a spiral galaxy, similar to, but larger than, our own galaxy. It has about two or three times the number of stars as the Milky Way.

M31 is visible to the naked eye on Moonless nights. Its existence has been known for over 1,000 years, but its nature as a galaxy separate from our own was not confirmed until around 1920, with the “Great Debate” between Harlow Shapley and Heber Curtis. Curtis was an advocate of many nebulae being external galaxies in their own right, and was proven correct. 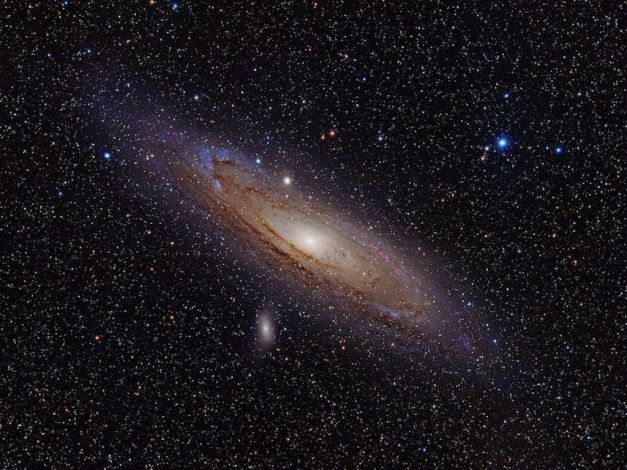 Our galaxy and the Andromeda Galaxy are gravitationally bound together in our Local Group, along with about 50 other galaxies, which are almost all small dwarf galaxies.

The distance to the Andromeda Galaxy is around 2.5 million light-years (thus we are seeing it as it was 2.5 million years ago). The mass is estimated at over a trillion solar masses, and it has a star count of approximately a trillion stars. It is moving toward us at 300 kilometers per second (1/1000 of the speed of light). It[…]”