Exploring the Mysteries of the Universe 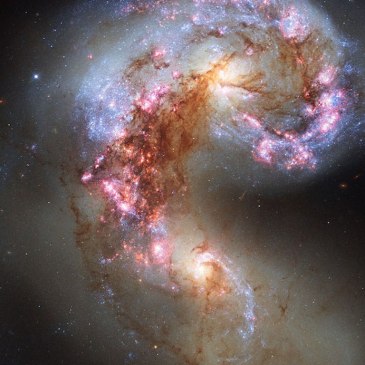 This is a pair of colliding galaxies, presenting an absolutely stunning image. Each of the two spiral galaxies is not so different from our Milky Way. They have spent hundreds of millions of years in a violent cosmic dance. Stars are being ripped from the respective galaxies and flung out into an arc between the two.

Gas clouds are in reddish colors, and the star-forming regions are seen in blue. The Antennae are in starburst mode, which is a phase of very rapid star formation. There are also many prominent dust lanes (dark areas).

This is a composite image based on both visible and near-infrared data from the Hubble Space Telescope.